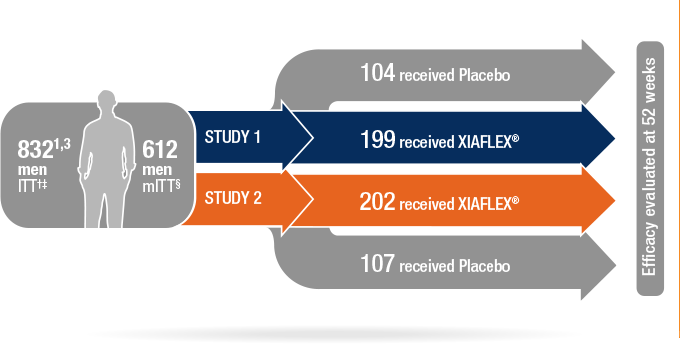 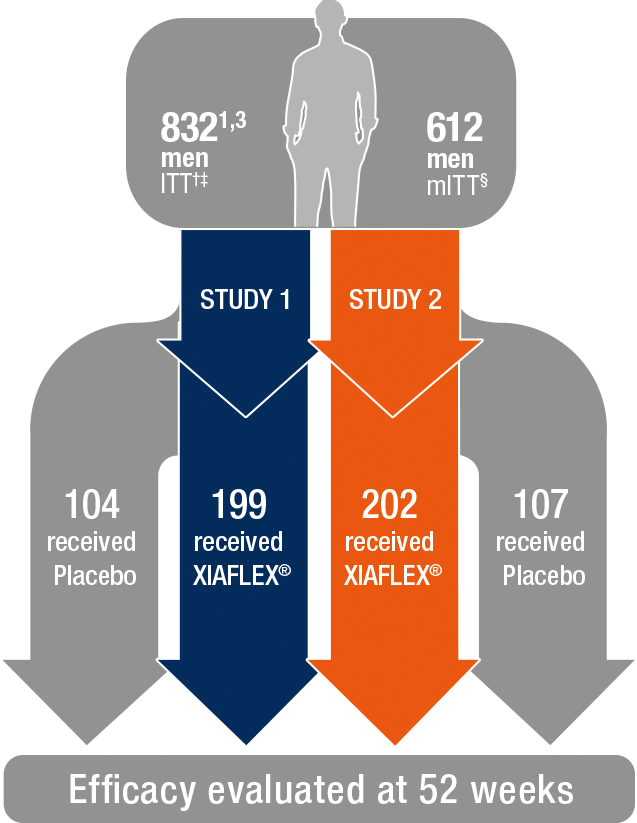 The efficacy of was evaluated in 2 randomized, double-blind, placebo-controlled, multicenter trials in 832 adult males with Peyronie’s disease (Studies 1 and 2). In these trials, patients were given up to 4 treatment cycles of or placebo (Weeks 0, 6, 12, 18), and were followed in a nontreatment follow-up period (Weeks 24–52). In each treatment cycle, 2 injections of or 2 injections of placebo were administered 1 to 3 days apart. A penile modeling procedure was performed 1 to 3 days after the second injection. The treatment cycle was repeated at ~6 week intervals for a maximum of 8 total injection procedures and 4 total modeling procedures. Patients also performed at-home penile modeling for 6 weeks.1

Before the first dose of study drug was administered, eligible patients were stratified by the degree of curvature deformity (30°–60°, and 61°–90°) and then randomized into 2 treatment groups to receive either or placebo in a 2:1 ratio.1

After up to 4 cycles of , improvement in erectile curvature from baseline to Week 521

In Studies 1 and 2, mean percentage change in erectile curvature deformity from baseline to Week 521 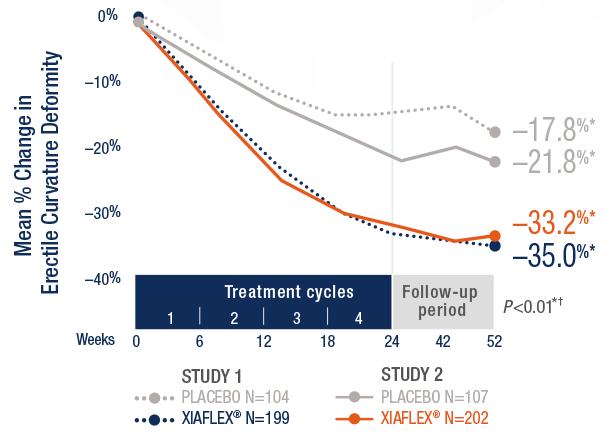 Mean percentage change, treatment difference, 95% CI, and P value were based on an analysis of variance (ANOVA) model with factors for treatment, stratum of baseline erectile curvature, and their interaction and using last observation carried forward (LOCF) in the mITT population. The mITT population was defined as all randomized subjects who had both an erectile curvature deformity measurement and a PDQ assessment at baseline and at one or more subsequent time points.1

Example of improvement in curvature deformity 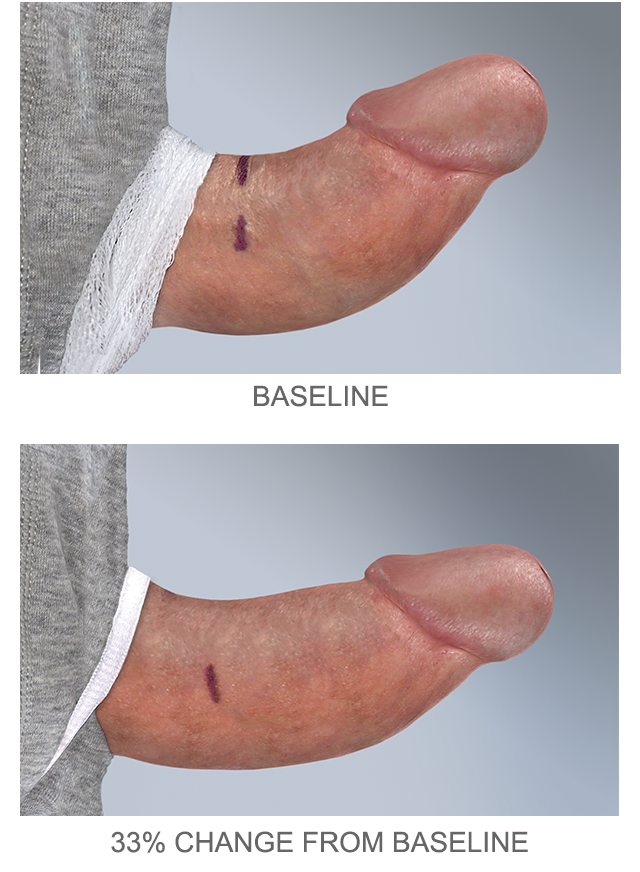 If the curvature deformity is <15 degrees after the first, second, or third treatment cycle, or if the urologist determines that further treatment is not clinically indicated, then subsequent treatment cycles should not be administered.1

What is Patient-Reported Bother domain score?

Mean change in Patient-Reported Bother from baseline to Week 521

reduction in Bother
from baseline or –2.8 points
with
N=199

reduction in Bother
from baseline or –2.6 points
with
N=202

Mean change, treatment difference, 95% CI, and P value all based on an ANOVA model with factors for treatment, stratum of baseline erectile curvature, and their interaction and using LOCF in the mITT population.

The mITT population was defined as all randomized patients who had both an erectile curvature deformity measurement and a PDQ assessment at baseline and at one or more subsequent time points.1 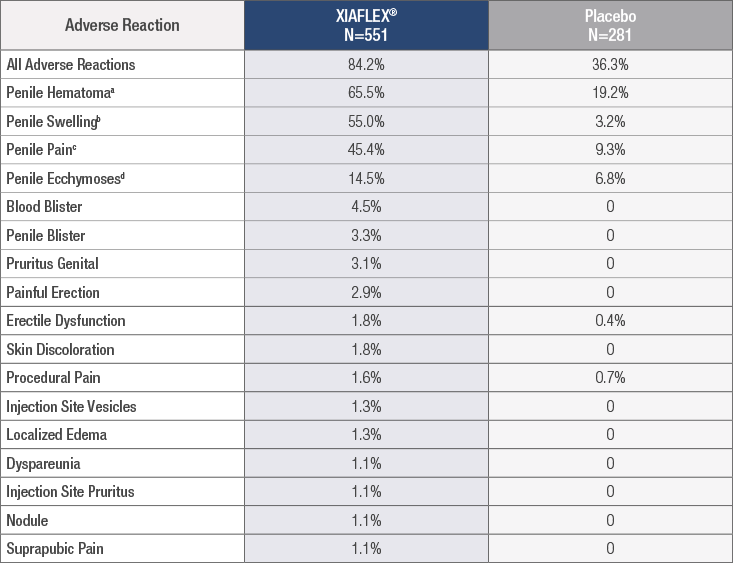 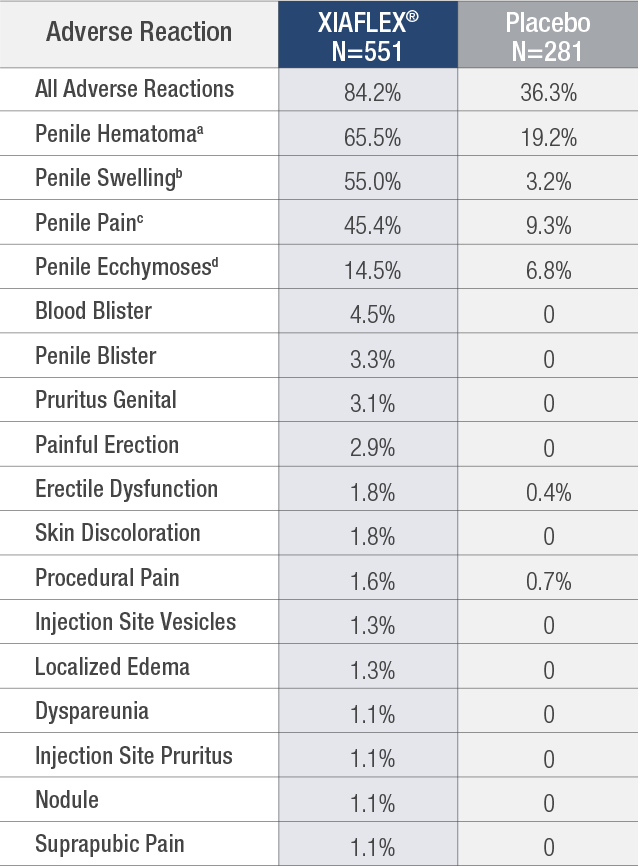 WHAT ARE PATIENTS SAYING
ABOUT ?

WARNING: CORPORAL RUPTURE (PENILE FRACTURE) OR OTHER SERIOUS PENILE INJURY IN THE TREATMENT OF PEYRONIE'S DISEASE

Signs or symptoms that may reflect serious penile injury should be promptly evaluated to assess for corporal rupture or severe penile hematoma which may require surgical intervention.

Because of the risks of corporal rupture or other serious penile injury, is available for the treatment of Peyronie's disease only through a restricted program under a Risk Evaluation and Mitigation Strategy (REMS) called the REMS Program.

is indicated for the treatment of adult men with Peyronie's disease with a palpable plaque and curvature deformity of at least 30 degrees at the start of therapy.

Intended for U.S. Residents Only

You are about to leave the (collagenase clostridium histolyticum) website.